Now that you have purified yourselves by obeying the truth so that you have sincere love for each other, love one another deeply, from the heart.
1 Peter 1:22

Jesus loved His disciples and showed His love for them through service.

Having loved his own who were in the world, he loved them to the end… so he got up from the meal, took off his outer clothing, and wrapped a towel around his waist. After that, he poured water into a basin and began to wash his disciples’ feet, drying them with the towel that was wrapped around him.
John 13:1-5

He also demonstrated the immeasurable love of God for us through His ultimate act of service:

But God demonstrates his own love for us in this: While we were still sinners, Christ died for us.
Romans 5:8

Love is the tether that holds us together and gives us the humility to serve one another.

Mountain climbing is dangerous business. Mountain climbers use rope tethers to attach themselves to their climbing partners. It requires the attention and the concern of every member of a climbing party to secure the safety of the entire group.

Everest was first successfully climbed in 1953 by Edmund Hillary and Tenzing Norgay. They tethered themselves together to make the climb to the summit. In doing so, they served each other. If one of them fell, the other could catch him. If one of them started to lag behind, the other could lend their strength and pull the straggler ahead. It required trust and LOVE to serve one another in such dangerous circumstances (the peak of Everest is just over 29,000 feet, near the cruising altitude of a Boeing 777).

In 1953, only two men had ever stood on Everest’s summit. In 2019, hundreds of adventure tourists paid guides to lead them to the loftiest pinnacle on earth. Most of them lived to share their experience, but not all. Eleven people perished on Mount Everest in the very brief climbing season in 2019. 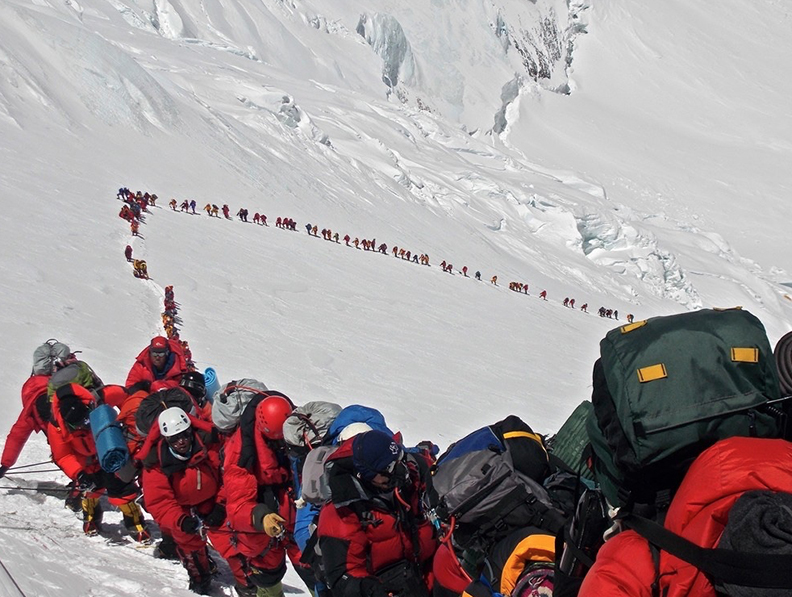 The nature of Everest adventure seekers has dramatically changed with the commercialization of the Everest experience.

Today, rather than having concern for their fellow travelers, Everest climbers are characterized by their indifference to the needs of their fellow sojourners. The mountain is literally littered with dead bodies. Over 100 bodies remain on Mount Everest because of the expense and danger involved bringing the deceased down off the mountain.

Everyone who attempts to climb Mount Everest knows the risks going into the trip. And, especially these days, everyone who even attempts to climb Everest coughs up an astounding $45,000. Some pay much more. You can understand how someone might be a little callus toward their struggling fellow-traveler when they’ve paid a year’s salary to take a once-in-a-lifetime kind of journey to the top of the world.

Being tethered together keeps us spiritually alive. The Strong can lend their strength to the Weak. The Helpless can find aid from the Helpers. The Worried can rest in the prayers of the Confident.

When we are tethered together with cords of love, we can all get to the goal of our journey, TOGETHER.

Don’t miss a devotional. Get your copy everyday by subscribing via email in this link: http://eepurl.com/ULhhD

I may have offended some this past weekend with my departure from the rules that govern our use of the English language.

In my defense, we do have a lot of rules to be mindful of.

“Do not end a sentence with a preposition.”

“Do not split your infinitives.” (The most famous split infinitive comes from Star Trek: …to boldly go where no man has gone before.

“Do not begin your sentences with a conjunction.”

AND as for the rule, I broke…

Well, I did. I broke that last rule into a thousand pieces and did not bother to even try to put it back together.

It was only one sentence, but it was one of the main points in my sermon.

This past Sunday was a special day to reflect on missions. Missions, in my working definition, include all of the ministry and projects we do or fund that seeks to bring people into the Kingdom of God.

You could correctly say that about 98% of what we do here at the church has a connection to missions.

My gross misuse of the English language occurred when I made this statement:

You are NEVER NOT a missionary.

I apologize to any English teacher who feels the need to scrub their ears clean after hearing that or wash their eyeballs after reading it.

But it’s true. It may not be the best way to express such a glorious claim, but that does not negate the fact that this is the truth.

On the evening of the resurrection, while the disciples were huddled together behind locked doors, Jesus came to them and commissioned them.

He wasn’t just talking to those few who were gathered there at that moment. Jesus IS talking to us, his 21st-century followers, present-day disciples, Christians.

To take the words of Jesus seriously, we have to take them personally.

The Father sent his Son into the world to save us.

Jesus is sending us to the world to witness to the salvation we have received and preach salvation to the perishing.

Jesus sends us. We are his missionaries. Every one of us!

In church life, we give special esteem to those who have answered the call of God to be missionaries in foreign lands, and rightly so. I admire deeply the sacrifices made, and the complete consecration of one’s life, that is necessary to live as a missionary in a foreign country.

But the term “Missionary” needs to be more broadly applied. We are missionaries if we are followers of Christ. He might not have called us to a far away land, but be calls us none the less.

As a Christian, you are a missionary whether you have a passport or not.

As a believer, you are an ambassador for Christ wherever you go.

As a child of God you represent your Heavenly Father every moment.

We are missionaries. Some of us serve in the neighborhoods we grew up in. Some of us have traveled a little farther.

The point is, be faithful wherever God has sent you.

To be a missionary where you are is just as important as being a missionary on the other side of the planet. God has given us all the opportunities we need, right here and right now, to make an impact on our community and our country.

And if God calls to you, to send you from here to some place he has in mind for you, be ready, be available, and be willing to serve him. It is only in faithfully serving him here, there, and everywhere, that we truly get to know him and grow in our love for him.

The month of March is Pastor’s Wife Appreciation Month. I had no idea until a few hours ago.

I appreciate my wife. I wouldn’t be much of a pastor without her.

Pastors’ wives have a calling of their own.  It’s a rare woman whose heart can carry the load that a minister’s wife must carry.

As a pastor, I deal with pain and loss and depression on a daily basis. The things around us have a way of becoming the trouble within us.

As a pastor helps a family through a time of mourning, or prays with an anxious soul at the hospital, or counsels with a broken brother, he is taxed.

Pastors get deflated. Life and work and ministry bursts their bubble.

A Great pastor’s wife is strong.

She sets about her work vigorously; her arms are strong for her tasks. (‭Proverbs‬ ‭31‬:‭17‬ NIV)

Kristi is strong. She’s incredibly strong, but she’s not going to tell you. She’s not one to brag.

Though she isn’t physically strong enough to open a jar of pickles, her heart is as strong as an elephant.

It takes a strong heart to suffer with the suffering.

It takes a strong heart to wait with the anxious.

It takes a strong heart to believe God for the impossible.

A pastor’s wife’s heart must do all of that, and so much more.

Do I even need I say any more?

God knew I would need someone strong and wise and loving for the ministry journey. So he gave me a great pastor’s wife to so that someday I might become a good pastor.

Send Me an Email

I'd love to hear from you. Send me an email at: pastorburden@fbcnederland.com